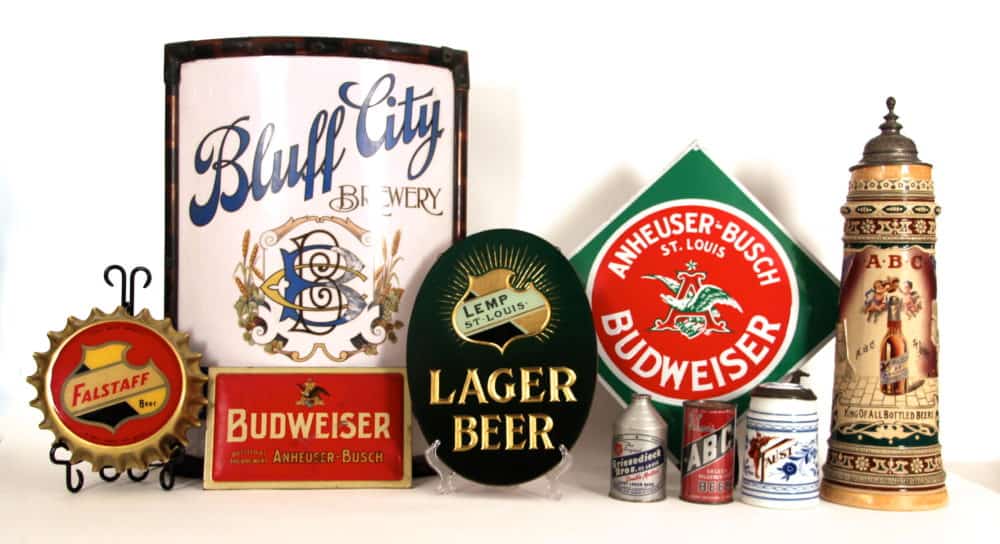 Breweriana spans a wide range of items having to do with beer and brewing. Key categories include beer cans, beer steins, beer trays, beer signs, beer bottle labels, and bottle openers, plus more unusual items such as tap knobs and bar statues. Many collectors also focus on specific brands such as Hamms, Pabst, and Budweiser.

Beer is one of the most widely consumed beverages in human history – the Chinese have been brewing it for over 5,000 years, and the Greeks and Romans revered it as a healthy beverage. But it was in the middle ages in Europe that beer achieved widespread consumption, because it was often cleaner than the water.

Beer has always been brewed in vats and barrels, but bottling has been around for over 600 years (the earliest bottles were made of leather). Glass bottles became more common in the 17th century, and beer cans came along in about 1935. Beer collectibles consist mainly of bottles, cans, and advertising. Advertising comes on coasters, matchbooks, shirts, beer tap knobs and handles, statuettes, labels, and signs.

Breweriana also refers to other types of alcohol, such as wine. Wine itself is one of the few consumable collectibles. Wine bottles, labels, openers, glasses, and wine-making tools can also be collectible.

There are also collectibles associated with hard alcohol and liqueurs, including a whole range of accessories associated with the liqueur absinthe, such as special glasses and spoons, and distinctive bottles. There are also brands like Jack Daniel’s, Jim Beam, Seagrams, Beefeater, and Bacardi, whose bottles, labels, promotional materials, and ephemera are widely collected.

What Kind of Beer Tap Knobs Are the Most Collectible by Breweriana Aficionados?

Collectors of breweriana are drawn to vintage ball knobs over modern tap handles primarily for their age and historical significance. The dawn of the tap knob industry began in the wake of Prohibition, when regulators first required bars and pubs to mark each tap clearly with the brand of beer being served. Small, simple ball knobs made of rounded metal or resin were the prevalent models from the 1930s through the 1950s.

How Can You Tell the Age of a Beer Bottle?

Material, shape, and the information on the label are all indicative of different eras. For example, the earliest American beer bottles were ceramic. Additionally, early labels included company names but were not product-specific, as companies often used the same bottles for a variety of products; therefore, the word “beer” does not even appear on some of the oldest antique beer bottles. The type of cap or other seal is another indicator of a bottle’s age.

What’s a Good Way to Display a Beer Coaster Collection?

Cheap, paper-pulp beer coasters are manufactured as disposable, one-time use items. They are by no means built to last. To preserve them in unblemished condition, breweriana collectors must store them carefully. To hang them on a wall, a loosened paper clip will do. Position the coasters in a spot away from moisture and direct sunlight. An even better method is to store the coasters in photo albums inside photo-protective cellophane or polypropylene pages. Alternatively, collectors can encase them under a resin or glass tabletop for a decorative display.