Visit our friends on the web!

Would you like to exchange links with us?  If so, please email information to: timzurko@zurkopromotions.com

We are a non profit international collectors club.  If you enjoy coin operated machines or have interest in them, you have come to the right place.  This website is a source of information, news, history, identification, and resources for all types of coin operated machines.  We hope that you will enjoy your visit and if you are not already a member that you will consider joining our club.

The purpose of the Coin Operated Collectors Association (C.O.C.A.) is to stimulate knowledge of, and interest in, the collection of vintage coin operated machines in order to:

Please visit them on the web at: https://www.coinopclub.org/

As a life long hobbyist, the late Sam Robins collected various items including stamps, coins, butterflies, caps and even beer tap knobs. However nothing excited him more than collecting and restoring antique cash registers.

Quoting from his book that he wrote on this subject he says:

“Cash register collecting is a relatively new corner on the hobby scene compared with some collecting mainstays such as stamps, coins, cars etc.One question frequently asked is, ” why would people want to collect registers?” There are a number of reasons. First and foremost, most of us start out by being attracted to the beautiful and intricate brass cabinets. When polished, a brass register looks like a giant jewel, almost a shrine to the money it was made to hold. It is hard to realize that a mechanism that is so commonplace today was a real novelty when first introduced and need handsome and elegant cabinets to be accepted. Todays Storeowner wouldn’t consider being without a cash register, but upon introduction, just the idea and function alone was not enough. Early cash register manufacturers had to sell their products not just by merit, but also as a fixture every storeowner would be proud to own and display in his establishment. That same original lure is the one that captures the interest of the collector today. Whether a collector has just one or 300 specimens, he or she usually has an appreciation Of what went into making the early models. Another factor to consider is that the early cash registers represent the know-how and evolution of the American inventor when the mechanized age was beginning to gain full momentum. Interchangeable parts, assembly line production and planned sales approaches were found in and some were initiated by the production of cash registers. As a collector progresses, he or she begins to admire the subtle differences in development from one early year to the next. The Ritty and other early entrants were quite primitive compared to models made just ten years later, although some employed total adder technology that was a dozen years ahead of their time. The advanced collector considers these as the most desirable and valuable. Some collectors have abroad range of machines trying to represent just about every model and maker. The problem of both space and pocket book generally prevents any of us going that route. I found that some collectors acquire only NCR machines, all others being considered “off brands.” Frequently many collectors just keep a certain style of NCR. For example,a collector might just have one wood cabinet models or narrow candy store type machines.

Other collectors are fascinated by the variety of designs found in “off brands.” What makes this such an interesting hobby is the diversity found within the realm of cash registers. One point pretty much agreed upon is that most collections stop at the end of the brass era around 1917 or so. The remaining cash register manufacturers could no longer produce the ornate cabinets due to the metal shortage during Worlds War I and had to convert to a plainer, more functional model. Unfortunately, the new appearance was the modern look of the time; the “old brassy” never returned.

One aspect of antiquing is that the item you collect has to be somewhat difficult to obtain, but not so difficult that you can not build up a collection. Any collector delights in telling the story behind finding a particular machine, perhaps even enjoying the search more than the ownership. Now what do you do with the machine once you obtain it? You’re faced with a few choices here. When first starting, most collectors tend to just accumulate cash registers, whatever may be available at the right place or price. Perhaps someday in the future many of these will need to be weeded out and sold, leaving the keepers that will likely be restored. After a while certain machines usually seem to be sought after to fill in a gap or just because you’re attracted to one model or another.

A big question is whether to restore or not. Frequently, this is a project from which many people get enjoyment that is equivalent to the hunt. The beauty of a brass register is realized when it is completely polished and redone looking like it did the day it left the factory. Sure there are some pristine original examples that perhaps should be kept that way, but for the most part, machines generally have a higher value when restored. each collecting area seems to have its own rules regarding restoration. For example, a coin collector would shudder at the idea of polishing up a rare coin, but how many prize-winning automobiles have you seen with original paint and chrome? Many machines were painted every time the owner redecorated his shop, so you’re not hurting originality by stripping and restoring it properly. How far and to what degree a machine should be restored is best left to the individual collector. If a machine is to be fully restored, it should approximate the original.

Over-restoring would alter the basic function or original appearance of a machine and would certainly hurt its value.”

Although cash register collecting is a relatively young hobby, it is growing in popularity throughout the world. Collectors in Canada, Great Britain, Germany, Japan and Australia are enjoying the rewards of finding new gems in relatively virgin territory. Now that information and parts have become available, non-functioning machines can be rebuilt and restored to their original beauty. As the hobby matures, the values are increasing yet rare specimens bring only a fraction of their true worth compared to other collectables. Now is an ideal time for new collectors to join in this hobby as new rarities can still be discovered. Who knows what lurks in the corner of some deserted barn or basement. If the love of restoring one these ornate beauties back to its original glow doesn’t grab you perhaps discovering the intricacies of these mechanical works or art or learning about their fascinating history and the role they played in developing American business will get you hooked. The staff and members of the Cash Register Collectors Club encourage you to learn more about this fascinating hobby.

Please visit them on the web at: http://www.crcci.org/ 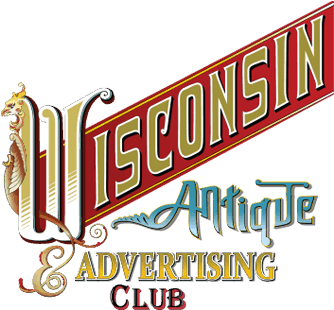 The Wisconsin Antique & Advertising Club has a lot to offer as demonstrated by this website. Just $30 gets your own page on the website where you can put up anything and as much as you want about you and Wisconsin’s history inside of club rules. Literally an ad for you allowing you to reach out to the World Wide Web for the bottles, antiques and artifacts you collect and to share your interest.

The club hosts a HUGE antique event at the Milwaukee Domes in late fall. See Show page for details.

The club hosts bottle hunt dive and dig events bi-annually and an antique Picker’s event… Everyone participating buys an item at a flea market then resells it on line. The person with the highest net profit receives a prize from the club including the high honor of most profitable club member.

By joining WA&AC you will accomplish three fundamental things, even if you choose not to participate in any other way. By sending in your $30 dues you will help this club grow. By joining you will have unfettered access to the Badger Collector’s Journal and the member only resources of the club site. By joining you will help build the future of antique bottle, advertising and antique collecting in Wisconsin. If you participate as a member you have the opportunity to advertise to the general public on the club site, attend cool events, meet new people, participate at the shows, a lot more AND inspire other collectors in your interest

As a member you become a resource and have unfettered access to the people who are the biggest resource of information about Wisconsin antiquities and the history that makes the antiques interesting and important.

We hope to see YOU at a club meeting, event, show or on the site soon.  http://www.wisantique.com/

Many of our members focus on specific areas, while other members collect everything!

That’s what makes AAAA fun and enjoyable for everyone!

Please visit them on the web at: https://www.pastimes.org/