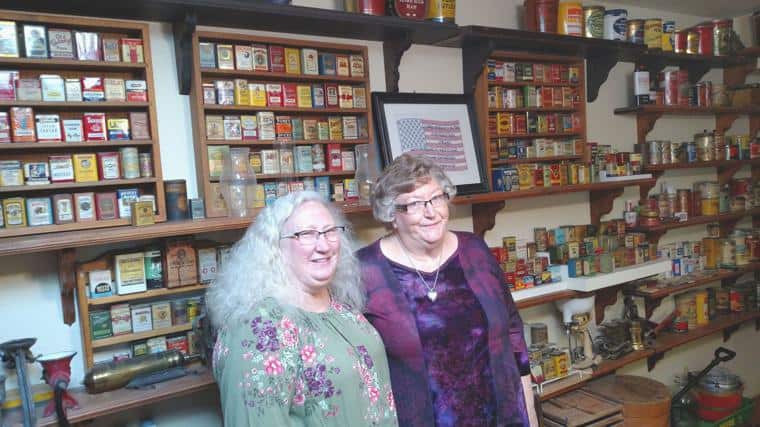 When Leona Voss of Phoenix met her late husband, Edward, at The Bloody Bucket in Iowa in 1958, she had no idea that 60 years later, she would have a house full of nearly 2,000 antique and vintage advertising spice tins, coffee cans, mugs, cookie jars, canisters, beer steins, vintage advertising toy trucks, antique clocks and other collectibles.

Now, Voss is selling the massive collection via auction March 31 at EJ’s Auction & Consignment, with the hopes that people as passionate as Edward will purchase the items and maintain them as carefully as he did. The collection will be sold in several lots, not as one.

“Edward loved history, and he found a lot of treasures at antique stores, farm auctions, swap meets and on eBay,” Voss said. “There was no rhyme or reason to what he collected, but he was most proud of his tin collection.”

An Army veteran who surveyed rockets at Fort Bliss, N.M., Edward Voss had an entrepreneurial spirit. He and Leona owned a grocery store for many years before purchasing a tavern. In the mid-1980s, the couple moved to Phoenix, where Edward worked in security and later retired.

Voss said Edward’s enthusiasm for collecting was passed down to their children and grandchildren.

“We all caught the bug,” she said. “Over the years, I collected Coca-Cola, Campbell’s, John Deere die-cast farm toys, Pillsbury and other branded mugs and cookie jars. My favorite was the Coca-Cola Christmas village that I was able to assemble after many years of searching for individual pieces. All of that will be sold in the auction.”

Erik Hoyer, owner and auctioneer of EJ’s Auction & Consignment, said he anticipates a lot of interest in the Voss estate collectibles.

“Antique and vintage advertising memorabilia, in general, is in high demand, particularly if the pieces are in good condition,” Hoyer said. “We’re honored to represent such a high-quality estate collection, and we’re looking forward to showing it off during our free preview prior to the auction.”

Leona Voss said it has been a big adjustment to having more space in the house.

“Packing up the items brought back a lot of memories for us, and we had a mix of happy and sad moments,” she said. “Now that I have more space, I’m going to create a sewing room so I can focus on my passion for quilting.”